Currently, recreational boaters utilizing Newport Harbor may set anchor in a designated public anchorage area located east of Lido Isle. This location allows boaters to anchor safely to relax and enjoy stationary time aboard their vessels outside of the Harbor’s active navigational channels (where such anchoring is not permitted).  Both day and short term overnight use of the existing anchorage is allowed. Overnight use of the anchorage is limited to a maximum of three days in a thirty day period. Users of the anchorage must adhere to various safety rules, including the vessel’s skipper remaining aboard the vessel while in the anchorage, at almost all times. This is currently the only designated public anchorage area in Newport Harbor. During the summer months, when recreational boating is typically most active, it is not unusual to find the anchorage congested and at full capacity with no room for additional recreational boaters to find safe anchorage.

In an effort to provide Newport Harbor’s boating community an alternative anchorage location and reduce the potential of crowding and over-capacity use of the only existing designated anchorage located east of Lido Isle (along with the goal of improving overall Harbor safety), the City of Newport Beach established a trial anchorage west of Lido Isle, which was in place during 2015, 2016 and 2017.  This trial was well received and has led to the City pursuing a request for consideration from the U.S. Coast Guard, for a longer term anchorage designation for the same general area.

Below are two diagrams, one showing the entire Harbor with the proposed West Anchorage, and a second showing the proposed anchorage in greater detail along with the adjacent areas which will be maintained for turning and general navigation. Please click on each of the diagrams to access the PDF version of the image. 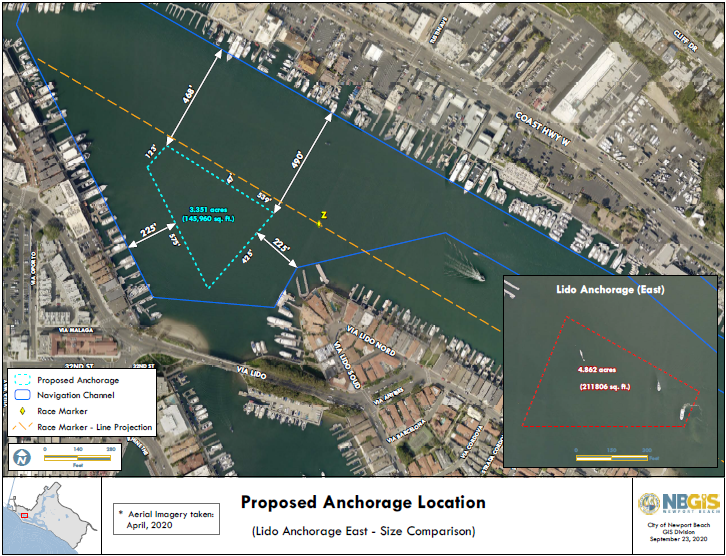