Residents of the Balboa Peninsula have historically experienced parking shortfalls. Late night or overnight parking demand from commercial uses within Balboa Village and commercial boating uses are seen as contributing factors that reduce parking availability in the residential area to the west of Balboa Village between 7th Street and Adams Street. Residents from this area have proposed, and the Balboa Village Advisory Committee supports, the creation of an overnight Residential Parking Permit Program (“RP3”) to eliminate "spillover" commercial parking onto the nearby residential streets. If enacted, overnight parking on specified streets would require a permit.

The proposed RP3 zone would affect all public streets between Island Avenue and Adams Street, except for on-street metered stalls at the median in Balboa Boulevard. The area east of and including Medina Way would be implemented first, with the area from east of and not including Island Avenue to Medina Way would be implemented after the successful implementation of the first phase and if it is necessary. The purpose of the program is to require overnight visitors to the Balboa Village area to park within the commercial village where parking is more plentiful thereby freeing up some spaces for residents and their guests. 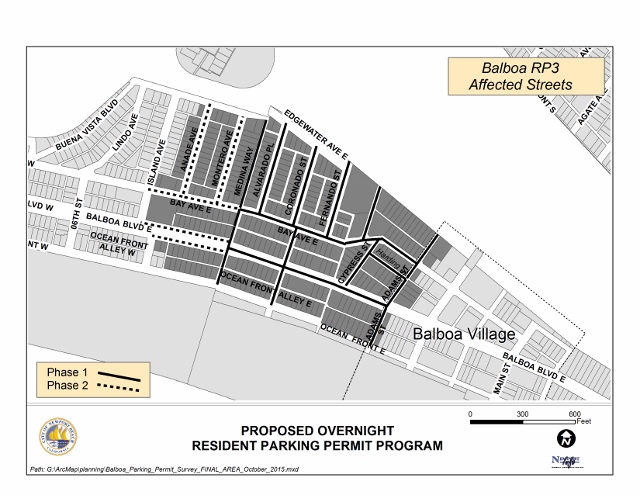 All residents within the proposed zone, including Mooring Area C Permit Holders would be eligible to purchase permits. Residents outside this area and residents of Bay Island would not be eligible. On-street parking would be restricted to valid permit holders between 4:00PM – 9:00AM, 7 days per week, excluding federal holidays. A parking permit holder would not be guaranteed an on-street street parking space but would be allowed to park in the preferential parking zone during the posted hours wherever parking is available. Up to four (4) annual permits per household and up to six (6) overnight guest permits could be purchased. Permits would cost $16 for each annual permit and $1 for each guest permit for each overnight period. These non-transferable parking permits would be issued annually and may be a sticker affixed to a resident’s vehicle; a rearview mirror hangtag; or linked to a vehicle’s license plate number. The method of permit is to be determined.

For further information, please contact Jim Campbell at 949-644-3210 or by email at Jcampbell@newportbeachca.gov.