The committee discussed uncertainties associated with future sea level rise, accessibility to docks and the beach, and the need to preserve the wonderful experience of walking the Islands’ boardwalks.

Please see below for updates:

The City is gearing up to add a nine-inch coping (or cap) on top of the seawall bulkhead (see Figure 1) along the north and south sides of Balboa Island (Figure 2). This is expected to extend flood protection for the island for at about 10 years, maybe longer. The height of the seawall along Grand Canal appears to be adequate so no coping extension is proposed at this time.  Additionally, no coping extension is proposed at this time for Little Balboa Island whose seawall is higher than Balboa Island.

Figure 1: An approximately 9-inch high coping would be constructed on top of the existing seawall cap. 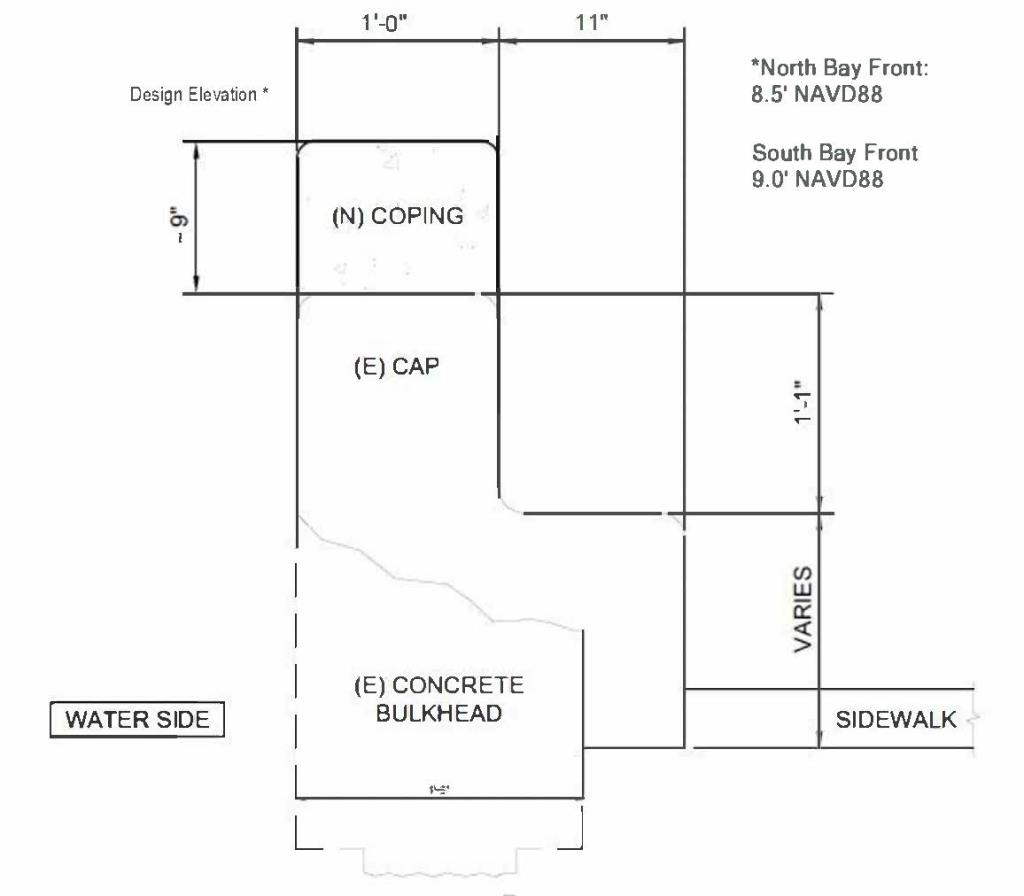 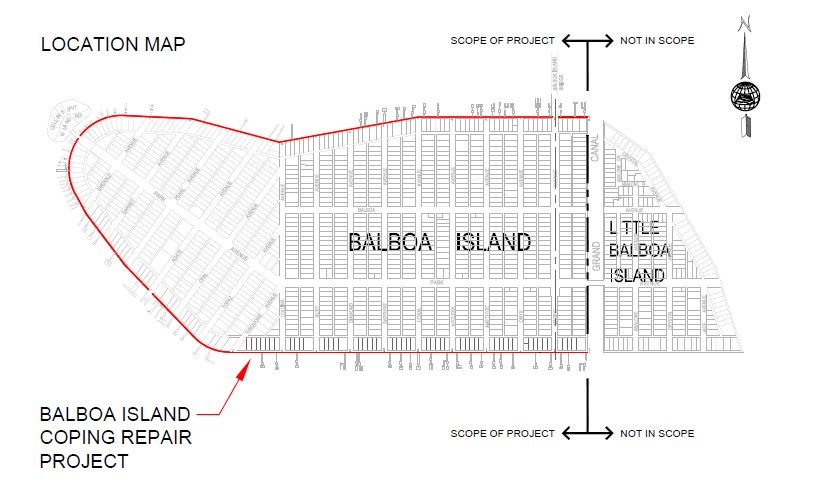 To preserve ease if beach access, with the construction of the 9-inch coping on top of the existing walls, the coping would not be added over a 3-foot long reach along the seawall near each street end to provide a gap for people to cross over the wall to the beach. These gaps would be located where the beach sand is higher to preserve ease of entry to the beach. To provide for flood protection during high tide events, these gaps are designed to accommodate a removable, 9-inch high barrier. Figure 3 shows a top view of the seawall where a 9-inch plate would be inserted into adjoining new coping to create a barrier to high tides.

The plan view in Figures 4a shows the placing of the 9-inch high coping in front of private docks. As this will create a very high step, a 36- to 48-inch long step will be constructed at shown in the section view (Figure 4b). 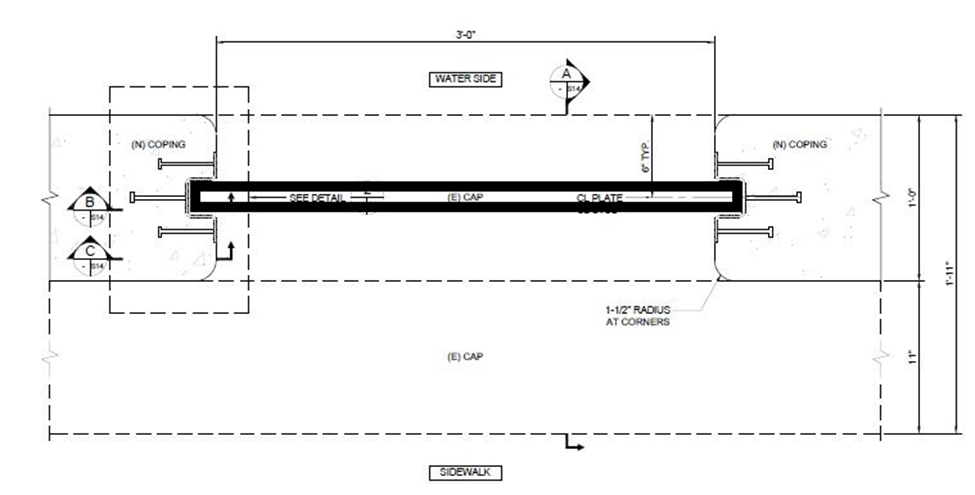 Figure 4a: Plan view showing the 9-inch high coping constructed in front of the entrance to the private dock. A concrete step as shown will be also constructed. 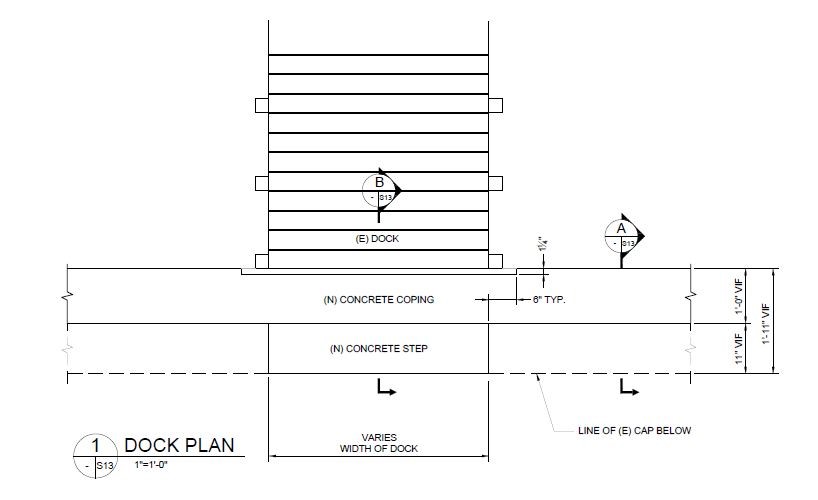 Figure 4b: Section view showing the construction of the 9-inch high coping and the variable height concrete step. 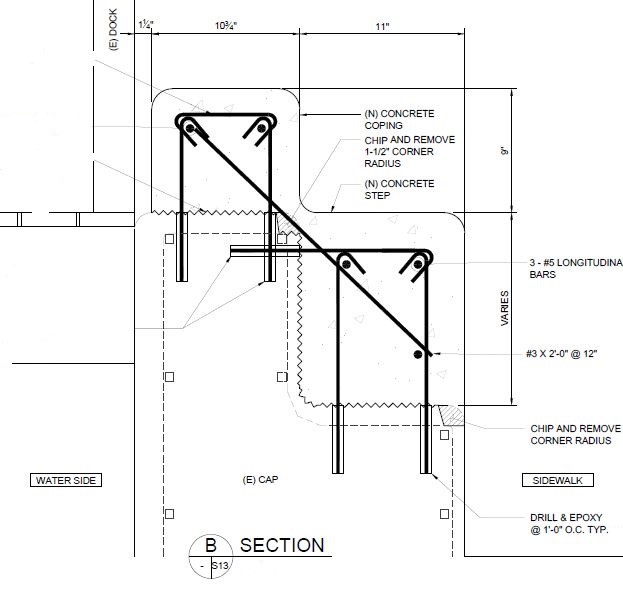 No improvements would be constructed on or within on the public boardwalk adjacent to the seawall. No work will occur in the water. During construction, the contractor will be conditioned to keep at least one-half of the boardwalk open at all times unless authorized by the City inspector on a short-term basis, to temporarily close the entire boardwalk to perform a specific task. Construction fencing or other suitable barrier will be installed to protect the public.

Work will proceed in 17 work areas with a work area defined as the reach from one street end to the next adjacent street end. Contractors will be able to only occupy and work in three non-consecutive work areas during each construction rotation, and move on to the adjacent work area once the completed sites have been cleaned and cleared of all construction debris. Construction activities would commence after Labor Day and be completed in approximately four months.  Construction activities will be limited to the hours of 7:00 A.M. to 5:00 P.M., Monday through Friday, and 9:00 A.M. to 5:00 P.M. For each work area, an average of six street parking spaces at the street ends streets would be used by the contractor for vehicles and material staging.

Please contact Mark Vukojevic at mvukojevic@newportbeachca.gov if you have questions or comments.

More information on the following is coming soon:

The City of Newport Beach is planning for the rehabilitation of the aging seawalls around Balboa Island and Little Balboa Island (Islands) to maintain the structural integrity of the seawall system and protect the Islands from flooding due to storm surges and high tide conditions.

1. How old are the seawalls around Balboa Island and Little Balboa Island (Islands)? What is their projected useful life?
The seawalls were first built in the 1920’s and 30’s and are between 75 - 85 years old. In recent years, a cap extension (Figure 1) was added to the bulkhead beam on some portions of the seawall to provide added flood protection. 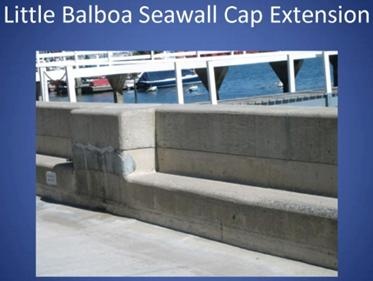 These seawalls have performed well in protecting the islands from flooding, but are now showing their age. The (exposed) walls are estimated to have between 10-25 years of remaining useful life. The walls along the north side of Balboa Island are largely covered in sand and the condition of these walls has not been examined. It is possible this reach of the seawall and other similar protected reaches around the islands may, with routine maintenance, have a longer remaining service life.

More information on the condition of the seawalls is available in the City’s assessment report from April 2011:

2. Are the seawalls around the Islands high enough to provide adequate flood protection?
Presently yes, however, there are a few segments around Balboa Island that are not quite high enough should we experience extremely high tides and waves. The photo in Figure 2 shows the water overtopping the existing seawall in December 2010 when the Islands were hit with a moderate storm surge at high tide.  Figure 3 shows the sea level near the top of the Balboa Island seawall on December 12, 2013 during a king tide with no wind or waves.

Should there be further rise in sea level; longer segments of the existing seawall around Balboa Island could be subjected to this overtopping. The Little Balboa Island seawall is somewhat higher than the Big Island due to a project in the 1980s that raised the cap. South facing sides of both islands can be more susceptible to periodic overtopping from wave run-up through the harbor jetty with large storm surges or wind driven waves.

Figure 2: Moderate storm surge during a high tide in December 2010 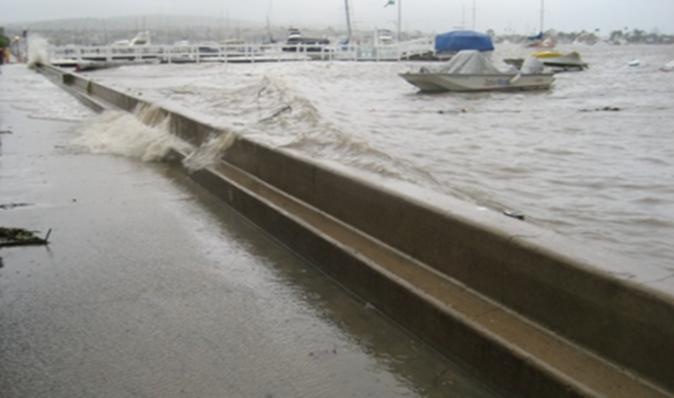 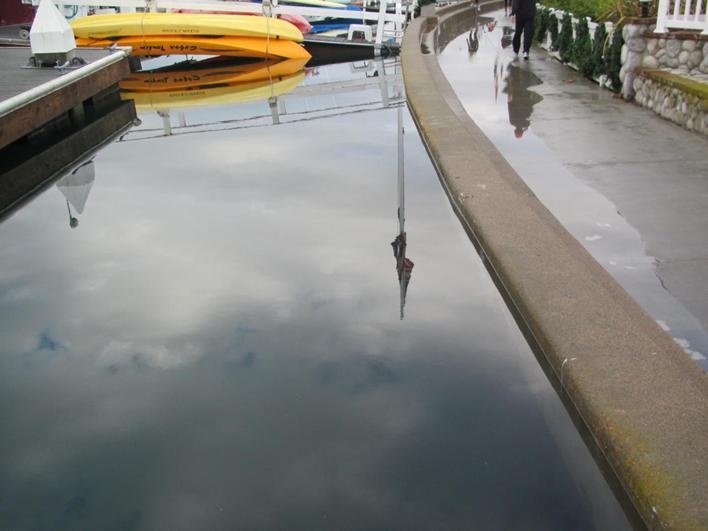 
Figure 4: Existing Top of Wall Elevations on the Balboa Islands.

4. How high are sea levels expected to rise?
There is a lot of work being done to predict future sea level rise over the next few hundred years. Table 2 lists recent studies. All these studies predict a significant rise in sea level over the next 85 years.

Table 2: Recent sea level rise reports with predictions for sea level elevations in Year 2100. Note that the ”95%” column on the right hand side of the table level indicates there is a 5% chance the predicted increase in sea level will be exceeded.

Physical process-based models aim to describe quantitatively the different physical processes that contribute to sea level rise. The process-based method relies on coupled atmosphere-ocean models to estimate the effects of thermal expansion and on sea-level models combined with certain empirical relationships to determine the influence of land-ice mass changes. The most conservative sea level rise is predicted by Intergovernmental Panel on Climate Change (IPCC). The IPCC uses the process-based methodology. Between 2007 and 2013, the IPCC has increased its sea level rise prediction (95% confidence) from 20 inches to 31 inches.

6. Would raising the seawalls reduce or eliminate flood insurance requirements?
Perhaps, but more study and FEMA review is needed. Please visit their website at www.fema.gov/national-flood-insurance-program.

7. Where would the new seawall be built relative to the existing seawall and what material would the seawall be?
The new seawall is recommended to be built on the waterside of the existing seawall (Figure 5). The new seawall will be made up of steel H-piles with concrete planks. Cathodic protection will be required for the steel H-piles to keep them from corroding. The existing pile cap will be removed and the boardwalk will be widened approximately 1.5 feet. The boardwalk may remain at the existing elevation. The design will explore opportunities to raise the boardwalk in conjunction with raising the seawall along certain reaches of the seawall. These opportunities would be discussed with the adjacent property owners.

Figure 5: Proposed new seawall built on the waterside of the existing seawall. 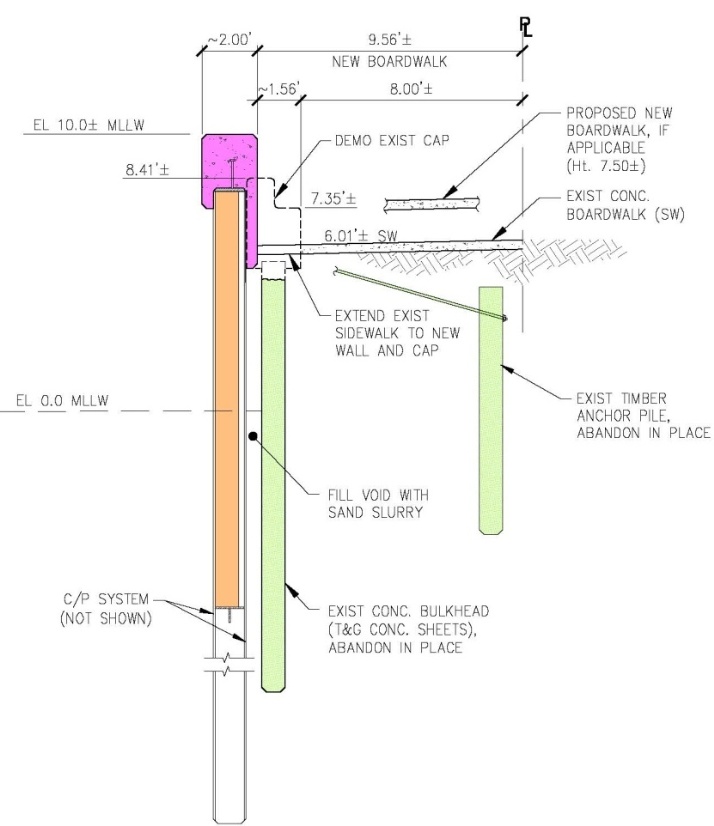 8. What would the top of wall elevation be for the new seawall?
The City is considering three basic options for constructing new seawalls and/or raising the existing seawall cap:

Figure 6: New seawall and cap extensions for Options 1 or 2. (Please click on the photo to enlarge) 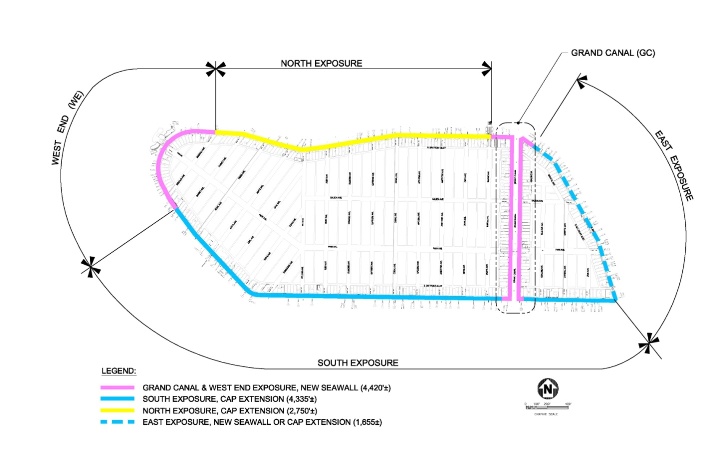 Figure 7: New seawall and cap extensions for Option 3. (Please click on the photo to enlarge) 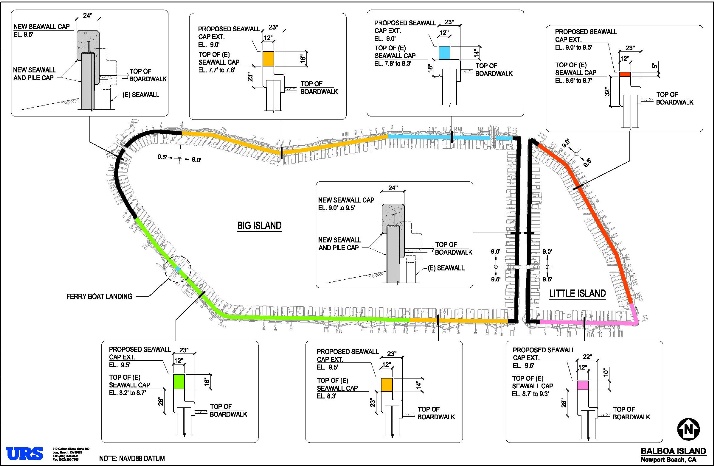 9. What are typical top of seawall elevation at other harbors?
The top elevation of seawalls at other southern California harbors is 9.5 feet (NAVD88) or higher. (See Table 3.)

10. Which option is best?
Table 4 compares the estimated schedule and costs for constructing new seawalls and/or raising seawall caps for the three options described above. The cost estimate include costs for providing access for private and public piers, providing beach access over the higher seawalls, providing flood protection at the ferry landing and at the Collins Island Bridge, and providing ADA access of the boardwalk adjacent to the Mariner’s Bridge. All costs are in today’s dollars and include a 25% contingency. Option 1 provides the best flood protection and the lowest overall, long-term cost. Option 3 has the lowest initial cost and would have the least impact on view planes.

Table 4: Projected duration of flood protection and estimated cost for seawalls and associated improvements for the three options.

Under Option 1, before 2063, aging capped seawall sections would need to be replaced by new seawalls at an approximate cost of $16 million.

11. When would the seawalls be constructed? How long would the construction take?
Before construction can begin, the City will need to design the seawalls and other related improvements and obtain a Coastal Development Permit from the California Coastal Commission along with several other permits from State and Federal agencies. That process could take 3 or more years. The seawall construction would likely be performed in two phases over a 5-year period with the seawalls of most concern, the Grand Canal and West End of Balboa Island, being in the first phase. The second phase would likely be the south sides of the Islands as they are more susceptible to waves from storms. The third phase may be the east side of Little Balboa Island with the final phase the north side of Balboa Island. The north side of Balboa Island is the most protected side from storm surges; however, these walls will also need to be reconstructed and raised in the event of sea level rise. Other items that would be constructed include access ramps for the public and private piers, beach access ramps, flood protection measures at the Ferry Landing, access modifications to Collins Island and boardwalk access modifications near Mariner’s Bridge.

12. Will we be raising the adjacent Boardwalk?
The City plans to maintain the existing boardwalk elevation for now unless there is an opportunity to raise along certain reaches. Staff would discuss options with the property owners adjacent to the reach of interest.

13. How will private dock access be addressed?
The various interface between private docks and the seawall; i.e. steps, platforms, etc., have been addressed as part of the seawall project in order to provide safe access. Proposed design options and style concepts are under development and will be posted in March 2016.

14. How will the beach be accessed?
The proposed design is under development.

15. If the boardwalk is raised, what about drainage from my property?
The project design will include proper drainage for both public and private property.

16. Who owns the seawalls around both islands?
The City of Newport Beach. In addition to the seawalls, the City is responsible for the streets and sidewalks; streetlights; and sewer, water and storm drain facilities.

17. Who will pay for the seawall project?
The exact method of payment is still under review as the concept and details are being developed.

18. Who can I contact if I have additional questions?
Please send your comments and questions to seawalls@newportbeachca.gov. Assistant City Engineer Bob Stein will be reviewing and responding to your emails.