The Federal Aviation Administration (FAA) is responsible for controlling all air traffic and flight patterns. Recently, the FAA implemented new departure patterns (see the "NextGen" web page) for John Wayne Airport (JWA) and all air traffic. You may be experiencing these changes in the form of hearing and seeing aircraft for the first time around your home or the aircraft may appear to be louder or closer than in the past.

JWA records, researches and responds to all noise complaints and wants to hear from our community. If you have a concern about aircraft noise, please contact the John Wayne Airport Access and Noise Office at 949-252-5185 or noiseinfo@ocair.com.

For more information on the FAA, visit its website at faa.gov.

JWA is a heavily regulated airport, but the well-known “John Wayne Airport Takeoff” has some misunderstanding about it. The FAA has provided general guidance for two Noise Abatement Departure Procedures (NADPs) for JWA–they are: 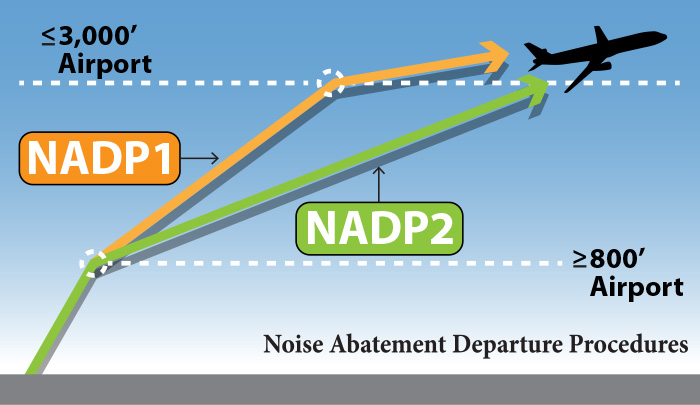 Ultimately, airlines develop their own procedures for each individual aircraft. This is especially true at JWA because airlines have to adhere to the Single Event Noise restrictions at the noise monitoring stations. Importantly, the NADPs are not and have never been required. To re-emphasize, what IS required is that a plane departs in a manner that does not cause the plane to exceed noise thresholds (in single-event decibel levels) at any one of the seven noise monitoring stations (NMSs) on the departure path. If a plane can depart on a steady climb with no cutback and still fly below the NMS’ dB levels, it doesn’t need to use either NADP.  Newer planes, lighter planes, and/or planes with less luggage and fuel can sometimes do this successfully.

The U.S. Environmental Protection Agency (US EPA) governs emissions from aircraft. According to the US EPA, “aircraft accounts for 12 percent of all U.S. transportation greenhouse gas (GHG) emissions and three percent of total U.S. GHG emissions.”

In July 2016, then-US EPA Administrator Gina McCarthy signed a US EPA action entitled, “Finding that Greenhouse Gas (GHG) Emissions from Aircraft Cause or Contribute to Air Pollution that May Reasonably Be Anticipated to Endanger Public Health and Welfare.’’ These findings were that:

The EPA’s findings are in preparation for a “future domestic rulemaking process” to adopt future GHG standards. Any future proposed aircraft engine standards would be open to public comment and review before they could take effect. As far as the City knows, at this time there is no specific intent on the US EPA’s part to engage in a future domestic rulemaking process regarding aircraft engine standards. You may wish to contact your Congressional representatives or the US EPA directly for more information or to express concerns.