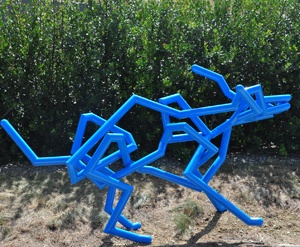 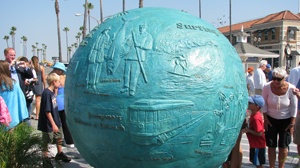 The McFadden Square Centennial Legacy Project was unveiled in a special ceremony on Monday, July 21, 2008 to commemorate the City's 100 years of history.

The public art and urban beautification project, which has been constructed at the base of Newport Pier, includes granite benches surrounding a bronze sculpture and a circular walking path marked with significant events from throughout the city’s history. The sculpture, created by artist Hank Kaminsky of Fayetteville, Arkansas, is a bronze sphere, five feet in diameter, with words and images illustrating significant events in the history of the 100 year history of the City of Newport Beach.

The project was inspired by the Centennial Anniversary celebration held in 2006 and funded with $500,000 of private donations from over 650 individuals, organizations and companies. Donors names are engraved on the granite surfaces throughout the project. 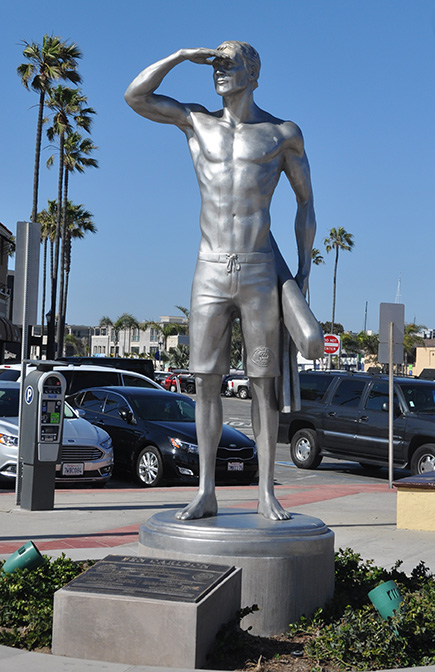 The sculpture honoring lifeguard Ben Carlson, who died in the line of duty on July 6, 2014, was installed in McFadden Square at Newport Pier in July 2016. The 9-foot statue, erected near the lifeguard headquarters, depicts Carlson gazing towards the ocean prepared for a rescue.

The lifeguard building was renamed the Benjamin M. Carlson Lifeguard Headquarters and a foundation, the Ben Carlson Memorial & Scholarship Foundation, was created by lifeguards, friends and family to raise awareness about ocean safety, to help under-served children and to raise money for college scholarships.

The memorial was part of the Foundation’s mission. His brother-in-law, artist Jake Janz, spearheaded the project. For more information on the Ben Carlson Foundation, click here. 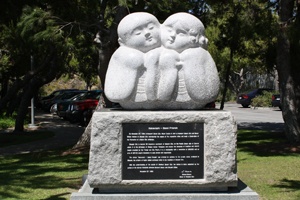 This sculpture was presented as a gift from Okazaki, Japan in 1994 to commemorate the tenth anniversary of the two cities "Sister City" relationship. 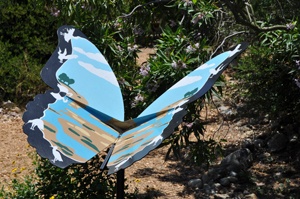 Dawn to Dusk in the Estuary

This butterfly sculpture was created as part of the Butterfly Initiative Project in 2005 by artists Kathleen Harrison and Arlene Cartozian. 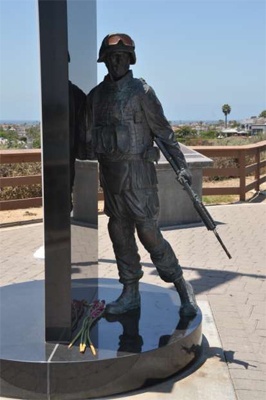 In 2003 the citizens of Newport Beach adopted the First Battalion First Marines, First Marine Division.  In 2008, this memorial sculpture was "created in honor of the men and women of the 1/1 who paid the ultimate price in defending our nation and our freedom." It stands overlooking the Back Bay and Newport Harbor in Castaways Park. 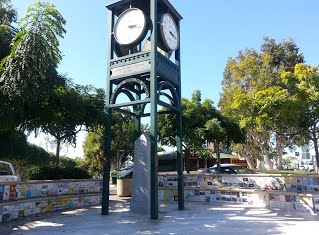 This clock tower and surrounding wall was created by the Corona del Mar Centennial Committee in honor of Corona del Mar's Centennial Anniversary. The green bronze edifice was installed in August 2005. 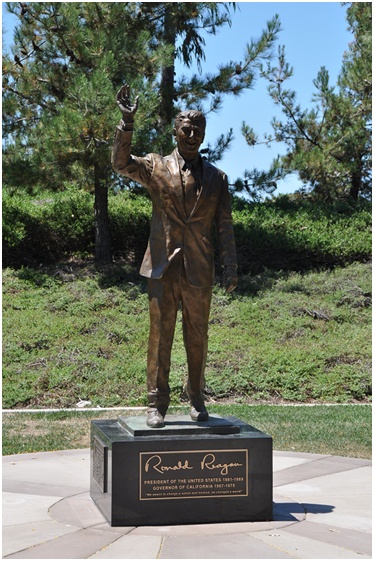 This sculpture, created by artist Miriam Baker was created in 2011 in honor of President Ronald Reagan’s Centennial Birthday.  Originally installed in Bonita Canyon Sports Park, the sculpture was moved to the Civic Center Park in 2017. 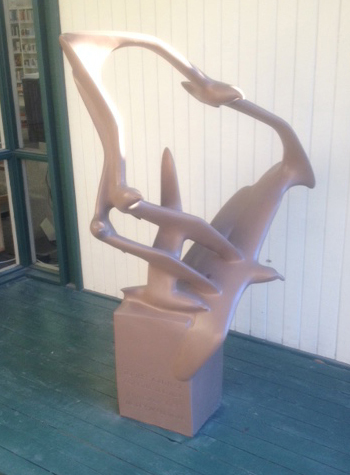 The sculpture was was commissioned by the Friends of the Library in memory of Molly McClintock, a local teen who was tragically killed in a car accident in 1960. In 2015, the sculpture was restored by Lanzini Art Restorers and stands in front of the Corona del Mar Branch Library. 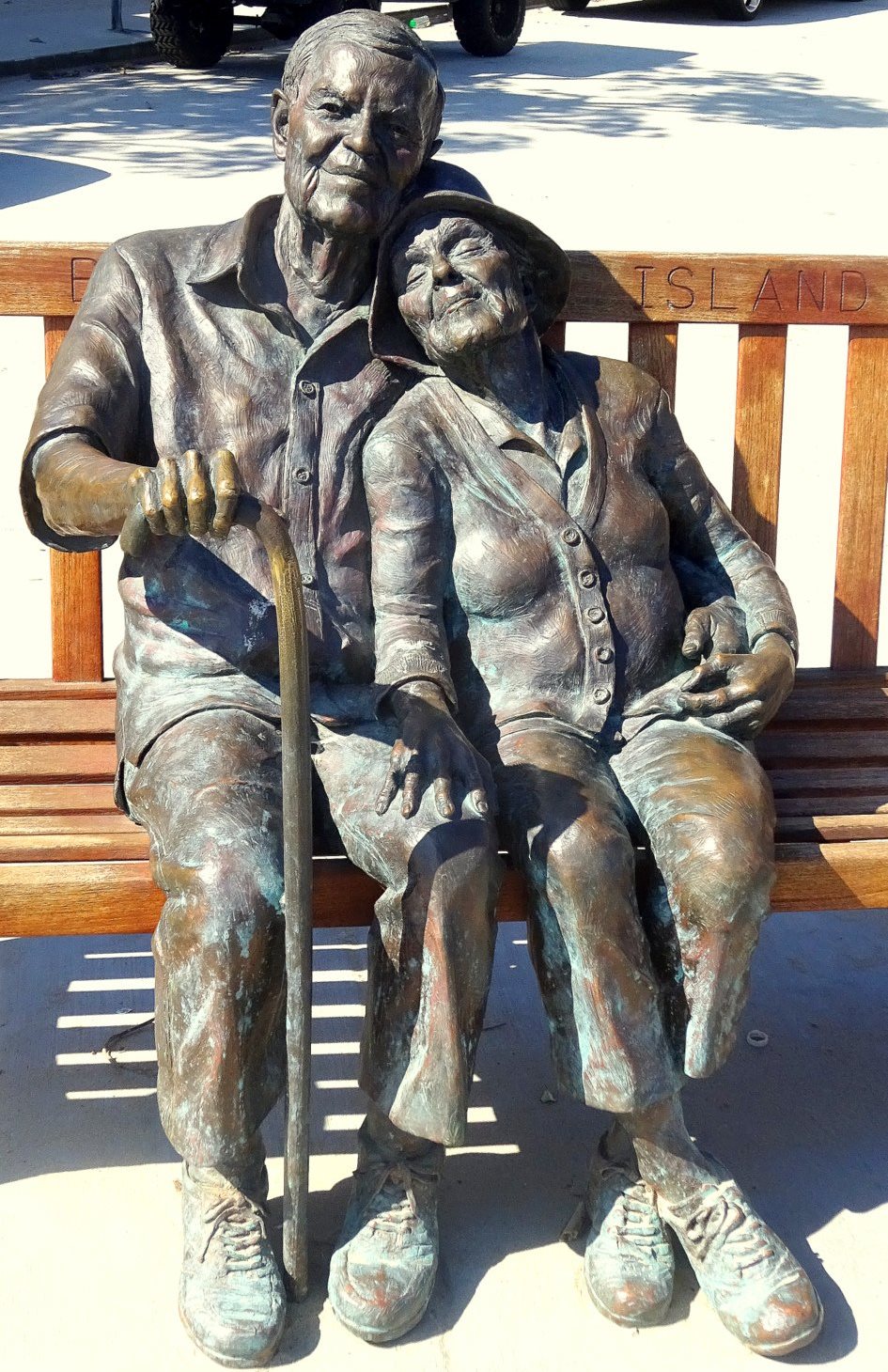 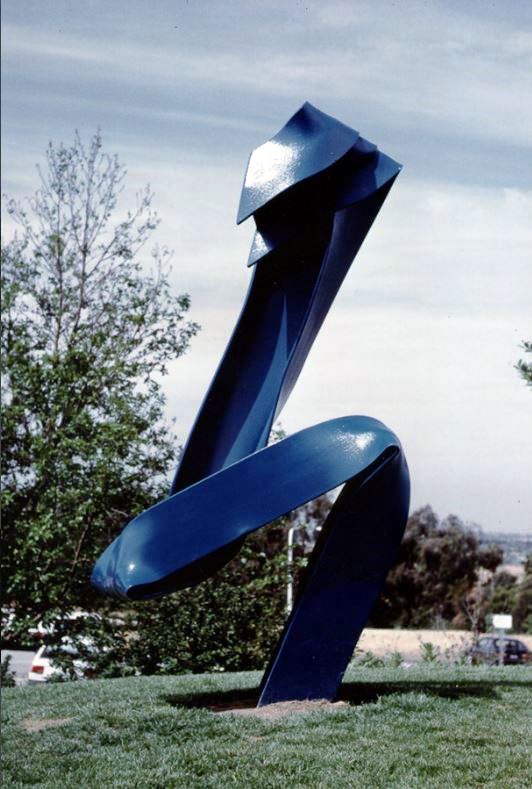 In 1986, Warren Hancock, a Newport Beach art collector, donated the sculpture Metalfor to the City of Newport Beach.  Created by Bret Price, Metalfor was originally installed outside the Newport Beach City Hall for part of 1986 and 1987, until it was moved to the front of the Newport Center Library.  When the Library closed in 1994, the City relocated Metalfor to its current location in West Newport.

The royal blue painted steel abstract work, which weighs 1,400 pounds and is 9 feet high, was the centerpiece of the 22nd annual Newport Beach City Art Festival in 1986. Intense heating of the metal to make it malleable created its curvilinear form. The steel was repeatedly bent and rolled during this period of elasticity to give it "a sense of softness (and an) illusion of flexibility," sculptor Price explained. 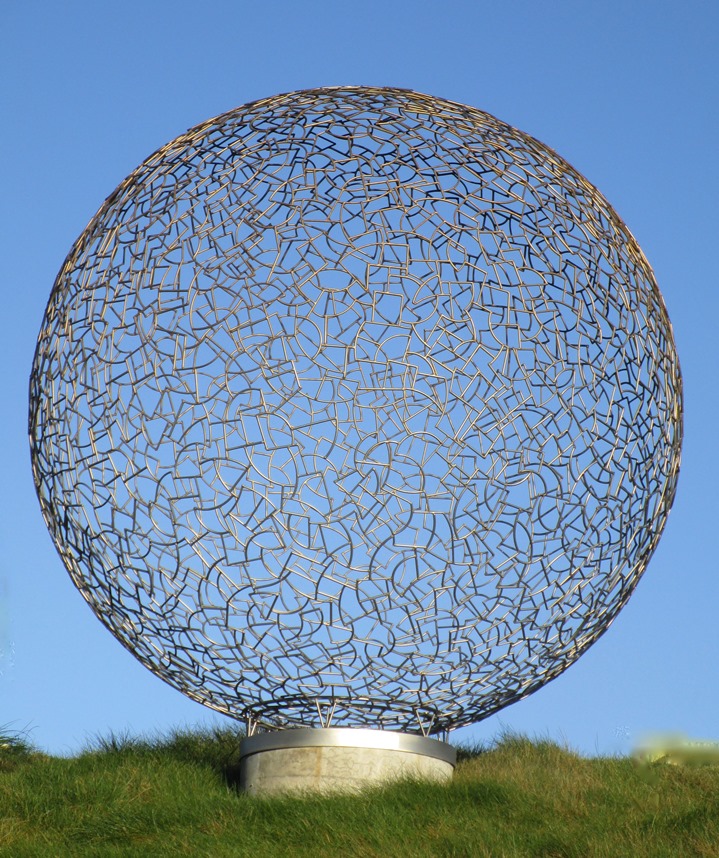 A public favorite first installed as part of Phase I of Sculpture in Civic Center Park Exhibition, Sphere 112 was crafted by artist Ivan McLane of Portland, Oregon. In 2017, the sculpture was purchased by the Newport Beach Arts Foundation and donated to the City of Newport Beach. The piece is crafted out of thousands of welded stainless steel rods of varying lengths and shapes.

Fun Fact: The Sphere was name for the size of its diameter, 112 inches, which means it stands at slightly over 9 feet high. 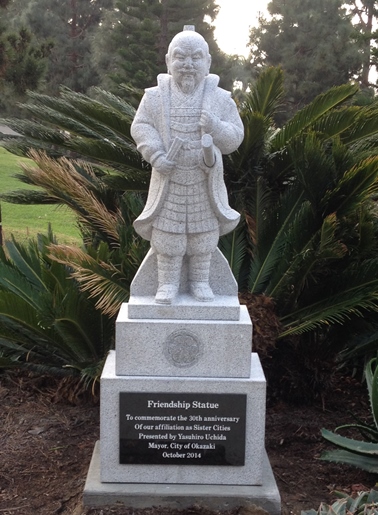 The sculpture was presented to the City of Newport Beach in October 2014 to commemorate the 30th anniversary of the affiliation of Okazaki and Newport Beach as Sister Cities. Presented by Yasuhiro Uchida, Mayor, City of Okazaki. 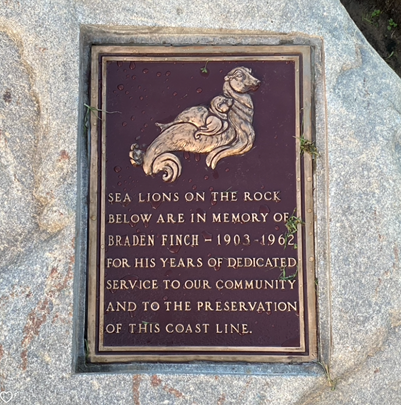 Sea Lions on the Rock

Sculpted by local artist Kay Finch in 1962 in memory of her husband Braden L. Finch, a former Newport Beach City Councilman, this bronze sculpture of a mother and baby seal were permanently mounted just below Inspiration Point in Corona del Mar in 1971.